I’m incredibly excited to present to you, ladies and gentlemen, boys and girls, the latest adventure novelist to sail onto the literary scene: M.C.D. Etheridge.

This talented author is already making waves and receiving rave reviews for his debut novel: Whitebeard, which tells the alternative, magical tale of the pirate who would become Father Christmas…

Yes, you read that right!

I’ve been fortunate enough to read both a working draft and the final version of this truly wonderful book. It’s captivating, hilarious and brilliant, from start to finish, and Olivia Ong’s imaginative illustrations really add to the joy. Anyone who has ever believed in Father Christmas, enjoys a piratical tale and hates brussels sprouts, should definitely give Whitebeard a read.

But, you don’t need me to tell you all about it! Let’s hear directly from the author’s mouth!

So here he is, to tell us in his own words, and give us all a sneak peak inside his masterpiece. It’s with my absolute great pleasure that I hand you over to the exceptionally talented, and wonderfully fantastic; M.C.D. Etheridge…

Where did the idea/inspiration for Whitebeard come from?
Whitebeard is the combination of the three things in life I’m really passionate about. Christmas, adventures (especially those involving pirates) and encouraging kids to read. I was a reluctant reader once and now as a journalist, words are my life. I’ve been able to have so many real-life adventures on the road, as a journalist, that I decided I wanted to give back to young boys, in particular, who sometimes struggle to enjoy reading. One of the books that converted me to the joy of reading was Roald Dahl’s Revolting Rhymes, I love how he took stories we’ve all heard a thousand times and turned them on their head. I thought it would be fun to do the same with Father Christmas and make him a pirate. I loved the idea of Santa starting out as an anti-hero and turning him into the man we all know and love today.

What age range is Whitebeard most suitable for?
It’s a great story for kids, young and old and adult sized ones too. The reading age is 7+ but it makes a fun bedtime story if you’re reading to younger ones. I mean, who doesn’t want to know how Santa got his magic?

Do you have a favourite character in the book, and why?
It’s hard not to say Captain Whitebeard himself. The jolly old devil! There’s an accepted wisdom, in contemporary children’s fiction, that books, aimed at this age range, should feature a child as the main protagonist, in order to make them more relatable to children. I can see the logic in this, however, I would also argue that it’s a rule that’s there to be broken. There are of course hundreds of great stories where kids are protagonists, I just don’t accept that it’s a formula writers should have to stick to, why not mix it up? That’s what I’ve tried to do with Whitebeard. I also have a real soft spot for Vixen too. She’s a feisty female pirate and a key protagonist in this story. In many ways, this first book is as much her story as it is the man in red’s. I often ask the kids, I read it to on school visits, who their favourite character is, and many of them (including the boys) say Vixen too, I’m really proud of that.

Anything, in particular, readers should be on the look out for?
There are so many myths and legends surrounding the man we know as Father Christmas, delving into his past is a bit like rummaging through a treasure chest, you find gold everywhere. Whether it’s the Dutch Sinterklaas, French Pere Noel, German Weihnachtsmann or good old Saint Nicholas, there’s an abundance of great stories to weave in. There’s also the opportunity to include various other Christmas traditions from around the world. If the hidden messages in video games are called ‘Easter eggs’, I like to think there are one or two ‘Christmas cards’ hidden here in Whitebeard. Each one a nod to a Christmas tradition or culture. Why not try and see how many you can find?

What does a typical writing/work day look like for you?
When I am focused on writing I tend to take myself off to fairly solitary places and go offline. I’ve been known to spend up to two intense weeks writing. No internet, no social media, no phone (but for one call a day to my fair maiden, Ilaria). I listen to classical music and split my writing hours into three sessions; morning, afternoon and evening. In between, I go for runs, long walks and always have a nice dinner, with no brussels sprouts! Now the book is available, it’s very different. I spend my time visiting schools and dressing up as the pirate captain Whitebeard (like a damn fool!). It really is so much fun though and the look on the kids’ faces is something you’ll never forget. Engaging the younger generations with reading is what it’s all about and all that hermit-like work pays dividends in the end. 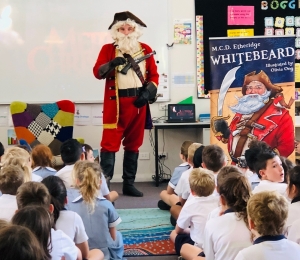 Do you prefer to write using a pen and paper or using a computer?
I prefer using a pen and paper but, because I officially have THE WORST HANDWRITING IN THE WORLD (EVER!), it’s no use, I can never read my own notes or make any damn sense of them. I’ve grown wise to my own inadequacies so as soon as I’ve written something on paper I type it up straight away onto my computer. This way I only lose 50% of my work! If I didn’t do this I would have absolutely nothing to show for years of hard yakka.

What advice would you give to anyone wanting to pursue their own ambitions of becoming a novelist?
Never give up. Always pursue your dreams. Always. As Shakespeare said “We are such stuff as dreams are made on” and it’s true. But you have to master your dreams. This means making time to sit down and write. Because of my work commitments as a journalist, it has taken me seven years to write this novel. SEVEN YEARS! But it’s been worth it. The best advantage you can give yourself is by being honest and knowing when you’re at your best. Make time for writing when you know you can give it your full attention. For example, I know I’m terrible with distractions, I have to unplug myself from everyone else to get serious writing done. I also know I’m more creative in the evening and have more attention to detail first thing in the morning after a run. So that way I get my ideas down on paper and let the creativity flow in the evenings, spending my time editing in the mornings.

Any special events readers should know about?
I’m encouraging everyone to take part in the Advent Reading Challenge. My book is in 24 exciting bite-size chapters. Try encouraging the kids in your life to read a chapter a day in December to make the countdown to Christmas even more special.

What’s your favourite pirate phrase?
Ahoy there young scallywags! There are so many great piratical exclamations, but I decided to give Whitebeard his own signature phrase – “Neptune’s noggin!” And I’m pretty happy with it. Yarrr!

Do you think Father Christmas misses his piratical days?
Without question. That’s why it’s very important to leave out a tot of rum with the mince pie and carrots on Christmas Eve, to remind the old salt of his seafaring days, when he sailed the seven seas alongside his piratical shipmates; Dasher, Dancer, Prancer and Vixen; Comet, Cupid, Donner and Blitzen.

Finally, will there be more Whitebeard adventures?
There certainly will! Whitebeard is the first book in the ‘Adventures of Whitebeard’ series. The second book should be out next year, with a bit of luck. Plenty more action-packed, festive fun to come!

And about that we’re really rather piratically pleased!